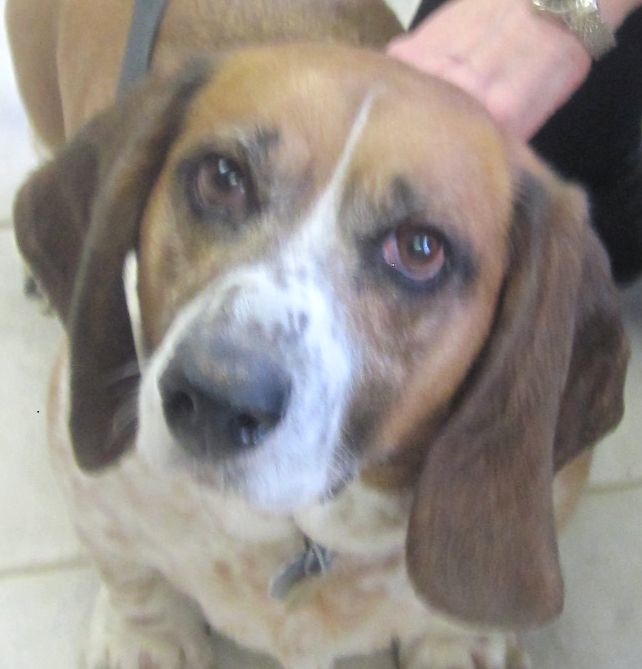 Angels come in all Shapes and Sizes

In our case, our little angel only stood 15inches at the shoulder, weighed in at 55lbs, had huge feet and ears, and legs that were only about 3-4 inches tall. Yet he brought so much joy and happiness to our home far larger than his short squat size would indicate. He was always in a great mood and happy to see you.

Our Angel, Sherlock, has lost his fight with cancer. He was always more a lover then a fighter and the fight was thankfully relatively short and with minimal pain. He was taken from us too early and his presence will be greatly missed. We all feel a huge gaping hole and will take some time to accept and deal with his passing.

I remember when we first got Sherlock, he was all feet and ears, in fact he kept tripping on those long ears and could barely put 3 steps together without tripping. He fit in to our family perfectly and was spoiled from day 1, never lacking in any and all creature comforts. Sherlock developed jaws of steel, and would very quickly dispatch most toys given to him, even those deemed indestructible or for heavy chewers soon succumbed to his jaws. I can’t count the times we have had to take away toys that we had just given him, because of fear that he would ingest something from within these so called indestructible toys.

Unlike most dogs, he would not lick your face, but your ears were fair game and amongst his favorites, so be for-warned if you got down on his level. He loved cuddling and as long as you were scratching and rubbing him, he was content to cuddle, stop and the ears got a slobbering. Most evenings he could be found on the couch with his mom, believing himself some sort of royalty, as he took up much more than half. Due to his short legs and long body, stairs presented quite the hindrance to him, while some smaller sets of stairs could be done one stair at a time going sideways after each step front feet down, turn sideways then back feet down, repeat, larger sets required a lift from his dad, whose right bicep was certainly more exercised then the left. He was challenged by the short legs but he used what he had to function. He would use his chin to lever himself up on the side of the couch or into a car, and then move his feet to the ledge to be lifted up the rest of the way

We use to think that Sherlock was more cat then dog, he was not always trying to impress in fact he waited for you to impress him, rarely came when called and we were not above tempting him with food to get him to follow instructions. Chantal taught Sherlock basic sign language could have him, sit, and laydown, stand up and speak with just a simple hand sign. He only performed these when food was involved, this was his great motivator. It was not uncommon for him to pick up his food dish with food in it and move it to where he wanted to eat, then lay down while he is eating, tilting the dish on its side with his chin so that he could get to it.

Sherlock made many trips to the vets, we use to refer to them as his spa days, to have his nails trimmed, his ears and his bum looked at. He loved all of the attention he received when there from the staff and after receiving it he was ready to go home. He used to hate having his nails done and it would take 3 of us holding him down to accomplish, later on he accepted his fate and waited patiently for the humiliation of someone touching his feet to pass. Dr. Johnson referred to him as her goof ball and always commented on the Sherlock shuffle. He was quite the character and will be greatly missed and always loved and remembered.

*We are closed Tuesdays between 1-2PM for staff training

For emergencies outside of regular office hours please call 613-345-3401 to reach our after hours emergency triage service.

For emergency care after 8:00 p.m. or Statutory Holidays please call:

Ottawa Animal Emergency & Specialty Hospital: 613-745-0123 or contact one of these emergency veterinary hospitals.